In 2000 and again in 2006, Professor Eleanor Maguire of the Wellcome Trust Centre for Neuroimaging published papers showing that London taxi drivers brains are structurally different from other people’s. If you haven’t had the pleasure of riding in a black cab, this may seem like a rather strange topic for study (certainly it must have seemed that way to the judges of the Ignobel Prize, which Eleanor won for the first of these studies). In fact, it was a very sensible investigation which has proved to be very influential: the hippocampus is critical for the formation of new long-term memories and plays an important part in the way we find our way around – it is thought to provide a “cognitive map“. In London, licensed drivers have to undergo several years of training – the Knowledge – until they know the roads and landmarks of the city like the back of their hands. When you hail a London cab, you can rely on the driver getting you where you want to go however obscure; it’s not yet certain, but it seems this level of expertise and experience changes the structure of their brains and especially the shape and size of the hippocampus.

On a recent trip to London, I took the opportunity to talk to my driver about the training and his own approach to learning and memory. He admitted that the Knowledge had taken over his life, and had been so stressful that at times he had chuck all his books and maps in the bin, only for his wife to rescue them, he also revealed some interesting intuitions about how memory works.

I thank the driver (whose permission I asked) – his name is, I think, John Law – unfortunately the clip where I thanked him did not record properly, and I am hoping someone will let me know the correct name, so I can append a credit to the video.

A lot of my research involves the hippocampus, part of the brain that is important for forming new memories. This video is part of a work in progress explaining the vital part the hippocampus plays in our memory for places, for knowing where we are and for finding our way around. END_OF_DOCUMENT_TOKEN_TO_BE_REPLACED

This is my brain. 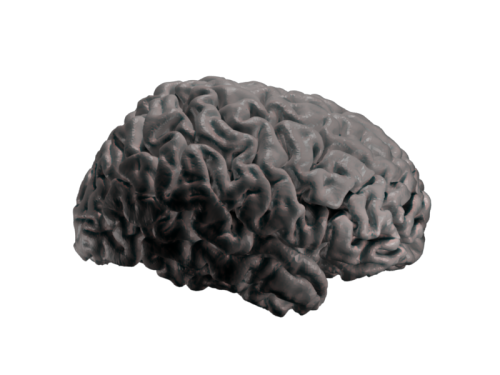 I am excited this morning, because I have finally begun to get to grips with Freesurfer a package for processing brain imaging data created by the Martinos Center. Freesurfer is a very powerful program which allows you to extract a very precise brain surface from an anatomical image. I rendered the picture above using the surface data for my brain, and a 3D animation program called Blender. Freesurfer allows you to project your brain imaging data onto this realistic surface. This is important because a lot of the interesting processes take place on the outer surface (cortex) which, as you can see, is scrunched up.

Brain imaging experiments help us figure out what different parts of the brain do (this is called functional imaging). From these experiments and from research with patients with brain injury we know that different parts of the human brain do different things. We do not know exactly what these functions are, or the best way to describe them, but they often seem to be laid out systematically on the cortex – if we could understand the system, we would be able to develop theories about what each part should do based on where it is. The convolutions make it possible to squeeze more cortex into the limited space of our skulls, but they also mean that it is hard to see the real pattern. Freesurfer lets you inflate the brain’s surface, smoothing out all the crinkles, which makes the pattern much clearer.

I am looking forward to doing this more and more with my own experimental results, but right now I am still excited just to be able to make such a nice picture of my own brain.

It’s a nice image based on an MRI scan of my head, with a section cut away to reveal the brain, but maybe slightly off-putting for the squeamish? 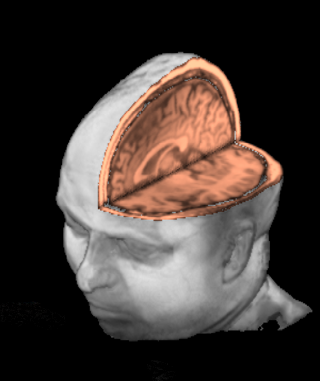